Sifting through the market of manufacturing equipment, machines, and various solutions, can often pose a challenge. While there are a significant number of options available in the market, sometimes there is a need for something very specific. That’s where custom manufacturing solutions come into play. At ABTech, we offer the opportunity to have a custom-built manufacturing solution to fit your exact need.

Through the years, we have taken on projects such as a measurement and loading system for optical film measurement, a 5-axis air-bearing positioning system, and we even worked on multifunctional machines for the NASA NuSTAR telescope. These projects were unique and individualized for the customers. Is there something you have been needing? Let’s take a look at these three examples while you think.

Peak Nano Optics develops optical lenses composed of film layers 10,000 times thinner than a human hair. These lenses are utilized in military and medical applications, making them extremely important. When they needed a custom-engineered system to meet tight specifications for these films, they turned to us at ABTech, as there was nothing of its kind on the market.

The system needed to not only be able to measure the films, but sort and load them as well. A challenge, no doubt, but one that was conquered quickly with a turn-around time of only three months. ABTech put out a system that precisely measured the refraction index of each film, checked the quality, and loaded them into sorted bins. And with that, we had successfully built their measurement and loading system for optical films.

ABTech worked with the engineers at Lawrence Livermore Labs when they needed a target assembly station with a position accuracy of 4-millionths of an inch. We designed and built a system for them that included six air bearings – three slides, two rotary tables, and a counterbalance pulley. It also included a Delta Tau motion controller, an operator control panel, and application software.

This system was used by the National Ignition Facility to place small amounts of adhesive to position BB-sized capsules of fusion fuel. These were then used as targets for the world’s largest laser to heat and simulate thermonuclear ignition. Pretty amazing. Without a doubt, we are proud to have been a participant in this very interesting project.

A Contribution to NASA 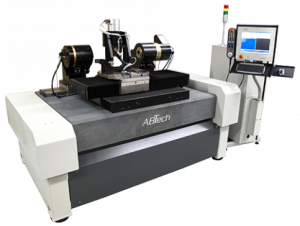 Inarguably, one of the most interesting projects ABTech has been a part of was the NASA Nuclear Spectroscopic Telescope Array (NuSTAR). We were given the challenge to develop a multifunctional machine that would work as a grinding lathe, an indexing tool for raster grinding, and an assembly station. The overall NuSTAR project, originally delayed, was brought back up to speed with our final product, which included two air-bearing-based optics assembly machines. Our contribution to NASA is often noted as a favorite.

Even the Sky isn’t the Limit

ABTech has been fortunate enough to work on massive projects throughout the years. We built a spindle used for 3D scanning on high-speed rail cars, an air-bearing rotary table for the South Pole, and many other fascinating pieces of equipment. Between those projects and the ones for Peak Nano, Lawrence Livermore Labs, and NASA, discussed above, ABTech has been a part of numerous custom-designed projects. So if you have been lucklessly searching everywhere for a product to fit your needs, get in contact with us; we are always ready for something new.