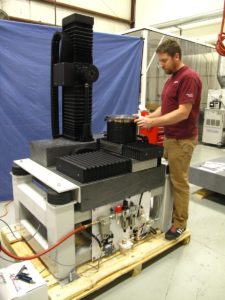 Alfred’s path to ABTech started when he purchased his first car, a 1989 Ford Bronco II.  He wanted a professional opinion so he brought his new wheels to a garage to have it looked over by a mechanic. The mechanic told him that the rear wheel bearings needed to be replaced.  After getting a quote from the garage and seeing the cost, Alfred figured he could ask his grandfather for help fixing the car himself. Doing the work on his own, with his grandfather’s guidance, his curiosity was sparked. He became interested in how things worked and realized he had the ability to fix things for himself.

Alfred wasn’t sure that college was the right path for him.  He had not always enjoyed school and he didn’t see himself paying to sit in a lecture hall!

Upon graduating from Monadnock Regional High School, he dove right into the workforce. Having an interest in making things, Alfred got a job working as a vertical mill machine set up and operator. Soon Alfred was ready for a change as he wanted to expand on his knowledge.  He began working at a shop that received contract work so every week brought something different. Starting out as a lathe operator, Alfred worked his way to setting up and programming lathes. With the variety of work that would come through the shop, he felt it would make him a better machinist while giving him the ability to hone his skills. 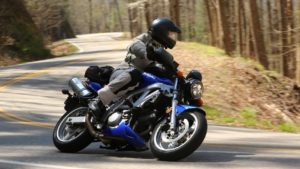 Riding the Tail of the Dragon

Having only worked in large companies, Alfred was ready to make the jump to a smaller one. He began working at ABTech in 2007. During the first few years, Alfred was able to see that many of his co-workers also had a passion for being ‘gear heads’.  It was around this time he was ready to trade in his car for something more fun. Speaking with other people who drove motorcycles, Alfred was able to choose a bike that would give him room to grow.  He landed on a Suzuki SV 650N. He has since upgraded to a Trumph Tiger 800 following a recent trip to the Great Smoky Mountains where he ripped up the Tail of the Dragon.

Pride in His Team

Alfred has experienced professional growth here at ABTech.  He first started out on mills, worked his way up to Assembly Technician, and most recently he has been promoted to Production Supervisor. His growth within ABTech has provided him with a valuable perspective across the manufacturing and customer fulfillment process. As a result, he has played a key role in researching and selecting new machines, hiring several new employees, and learning along with the company how to better achieve goals. He describes ABTech as having a family-like environment. If a challenge presents itself, there isn’t the pressure of having to fix it alone.  At ABTech you feel comfortable talking to co-workers and finding a solution together.